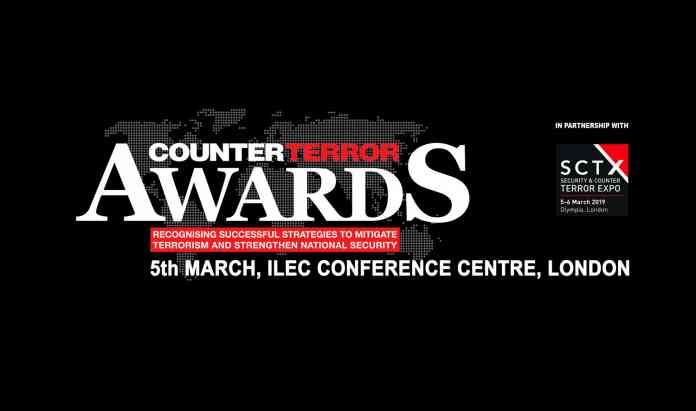 The Counter Terror Awards is staged to recognise the efforts of organisations in both the public and private sectors and their contributions to counter terror strategy in the UK and overseas, as well as the vital role played by the military and emergency services in mitigating terrorist threats and striving to keep the public safe.

Organisations from the UK and overseas will be recognised in twenty categories for their contributions to reducing the threat from global terrorism at the 2019 Counter Terror Awards, which will take place on March 5, 2019.

The shortlisted organisations are:

Transport Security Award, sponsored by the Transported Asset Protection Association
Recognising the efforts of private and public sector organisations and the technology which assists in increasing security at airports, ports and borders.

University of Nottingham - Centre for Conflict, Security and Terrorism (CST)

Threat Detection Award, sponsored by Esoteric
This award recognises products which assist in the detection and disruption of terrorist threats to the UK and its interests.

Counter Terrorism Education Project, sponsored by KNect365 Learning
Presented to an organisation or partnership which has developed and implemented measures to help combat the threat of radicalisation in educational or religious institutions.

Presented to an overseas governmental organisation or public/private partnership which has developed and implemented an effective counter terrorism strategy or awareness campaign.

US Department of Homeland Security - Soft Targets and Crowded Places

Counter Terrorism Project (UK/Ireland), sponsored by Dacha
Presented to a governmental organisation or public/private partnership which has developed and implemented an effective counter terrorism strategy or awareness campaign.

Emergency Services Award, sponsored by BLÜCHER
Presented to an Emergency Service (Police, Fire, Ambulance) which has implemented and tested a strategy to cope with terrorist attack

This award recognises a product which, as part of an overall design, provides effective physical security to protect against and mitigate the effects of a terrorist attack

Awareness Campaign
Presented to a public or private sector organisation which has devised and delivered ans campaign which has increased awareness of a particular area of counter terrorism.

Best use of UAV Technology
Presented to the most innovative use of technology designed and developed for the purpose of protection against UAVs / hostile drones.

CBRNE Product Award
Presented to the product which has the potential to to provide effective protection for emergency services and/or civilians against attack from Chemical, Biological, Radiological and Nuclear weapons.

Recognising an organisation which has developed and introduced an effective information sharing strategy.