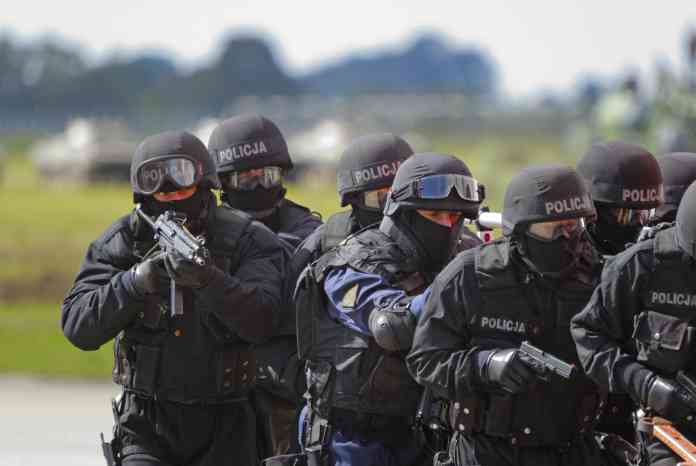 Terrorism related investigations are complex, with a range of police and counter terrorist officers arriving at the scene. For the public, establishing who is who can be difficult, especially given the varying attire that officers wear. Here, Dr David Lowe explains why counter terror officers wear different clothes

Over the last few years a number of European states have unfortunately witnessed a number of terrorist attacks where the news media coverage have shown pictures of police staff at the scene wearing different operational clothing. What their role is will determine what they will be wearing. There will be differences between states’ policing agencies and departments clothing, but many are similar and recognisable and this short article is aimed to assist in explaining why they wear different clothing and what they do.

Perhaps the greatest similarity is the states’ police armed response units/specialise firearms units. Wearing body armour, helmets, flame retardant balaclavas and goggles, along with carrying rifles, these officers look intimidating. Due to their role at terrorist incidents their clothing is designed to provide the officers with maximum protection. Apart from attending scenes where an attack has taken place, these officers are also used to secure entry into premises where terrorist suspects are believed to be and where those premises are required to be searched for evidence relating to terrorist activity.

Where it is suspected that either firearms or explosives, or both, will be on the premises, their role upon securing entry to the premises is to make the premises or scene safe for forensic teams and detectives to enter. Examples of the dangers these officers face upon entering premises came to public prominence with the death of an Islamic State group leader, Abdelhamid Abaaoud in November 2015. Following the Islamic State Paris attacks in November 2015, Abaaoud was located to an apartment in the Saint Denis district of Paris, from where a four hour siege took place. As the armed officers went to enter the premises, Abaaoud’s female cousin fired an AK47 rifle at the officer before blowing herself up and Abaaoud, who was killed during the siege, fired on the officers, resulting in four of the French officers being injured. Belgian police armed units faced similar circumstances in the Molenbeek district in Brussels following an attack in the city in March 2016, where one suspected terrorist linked to the Islamic State group was killed.

Once premises or a terrorist incident scene has been declared safe by the police armed units, forensic science teams and detectives will enter the premises. Regarding a terrorist incident, it could be an attack in a busy area such as a shopping mall or a location that attracts a high number of people such as a tourist attraction or a major sporting event. The attack could be like those we have unfortunately witnessed in Europe in the last couple years that has included bomb attacks, the use of small arms fire or driving a vehicle into people. As this is a crime scene uniform officers will be policing the outer cordon. This is simply because most people passing the area will recognise them instantly as police officers and it will make the job of minimising contamination easier. As with entry to premises, once an area has been declared safe by police firearms units, forensic and specialised police teams will enter the scene, specialised police dog units where dogs trained to find explosives or other items linked to the search for evidence will be deployed to the scene, where invariably the police dog handler will be in uniform. Police forensic staff will also be easily be identified as they will be wearing their white or blue forensic one-piece suits, latex gloves and usually a mask covering the mouth to prevent and minimise any cross-contamination.

Policing agencies
In relation to police officers who carry out terrorist related investigations clothing differs between various states’ policing agencies. It is rare to see these officers in media reporting of terrorist incidents. Following the aforementioned attacks in Paris, some police officers were seen wearing plain clothes and balaclavas with vests saying ‘police’. Most of these officers were part of France’s Research and Investigation Brigade (BRI). This police unit is part of Paris’ own police department where the officers are trained for stakeouts and surveillance and so, for obvious reasons, while attending the scene of terrorist attacks or at locations where searches are being carried out, to prevent them being identified they are wearing balaclavas. There are a number of reasons why most of the time your rarely see detectives or officers from special units related to terrorism investigations. One main reason behind this is that during an investigation into suspects surveillance will be carried out, be in foot or mobile surveillance.

While there are a number of investigative methods to gain information, or more importantly evidence against a suspect, one method is through direct surveillance of that suspect including foot surveillance. Naturally the investigating officers’ dress code will vary according to the circumstances of the investigation at that particular time. Be it static observations or one where the suspect is being followed, the officer will have to dress accordingly that will enable them to blend in the area. As such there is no specific dress code for surveillance work. This can also apply to counter terrorism investigators when meeting their informants. For officers not engaged in surveillance work this may be different but again it depends upon the dress code for each states’ detective officers. For example, in the UK detectives are predominantly expected to wear office/business attire while working in their office or making enquiries. Again the dress code is open to change should those officers be attending a scene be it premises subject to a search or where a terrorist incident has occurred. This could entail less formal wear such as denim jeans and training shoes, but most officers will wear a protective body vest and a police baseball cap. Unlike the UK, in most states’ detective units they are likely to also carry a firearm, usually a 9mm semi-automatic pistol.

Identification
Terrorism related investigations are complex, especially in the unfortunate occurrences where the investigations follow a terrorist attack resulting in police officers and staff from police departments outside the counter terrorism units attending the scene. Regarding officers not wearing a police uniform, it can be difficult for the observer to identify which department the various officers work in and what roles they carry out. To summarise, the most visible and identifiable are uniform officers assisting at scenes by policing the outer cordon to an incident to help preserve a crime scene as well as forensic police staff working inside that cordon searching for evidence. Also, more readily identifiable are officers from a state’s specialised firearms unit who attend to make safe a location where a terrorist attack has or is taking place, or, to secure and make safe premises linked to terrorist activity that are to be searched. It is other police officers, normally those who are part of specialised units that investigate suspected terrorist or terrorist acts, that are more difficult to identify as to what their role is. As they carry out various forms of investigation, especially surveillance work, it is necessary that they dress according to the role and area they are working in.